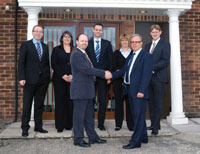 HIGH WYCOMBE: In a year that has seen Monodraught develop new distributors overseas, the company is announcing a series of board and sales appointments to strengthen the management team.

Jesper Dalsgaard has been appointed as Monodraught's new chairman.

Tony Cull takes on the role of managing director from Terry Payne. Mr Payne is appointed to the board as a non-executive director and also acts as a consultant to Monodraught. Mr Cull, who joined Monodraught 20 years ago and has been technical director for the last 10 years, has been instrumental in seeing annual turnover grow from approximately £300 000 to over £15m.

Monodraught's head of design Nick Hopper is appointed a full board member as technical director. He continues his responsibility for the development of new solar-driven products including Sola-boost and Cool-phase, which have been developed in conjunction with the Carbon Trust and Nottingham University. Mr Hopper joined Monodraught in 1996 as a design engineer after graduating from Southampton University with a degree in product design.

John Istead has been promoted to national sales manager having held a regional role seven years. While continuing in his field role, Mr Istead will also be responsible for growing the sales team and ensuring that Monodraught's clients receive best possible service.