Awards Double for New Kid on the Block- Alfie 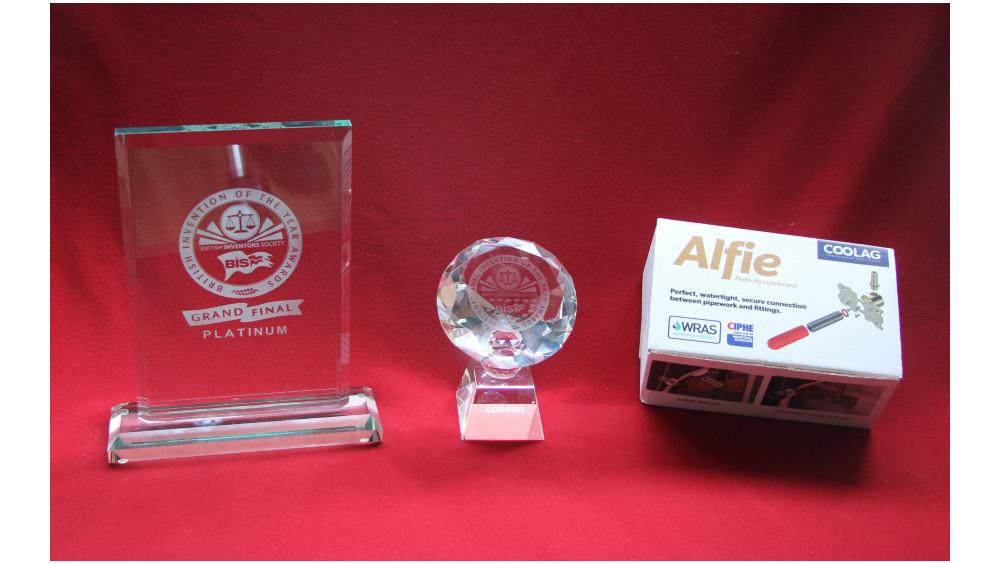 An innovative new wall mounting device for bar shower valves and other brassware is not only proving a commercial success with plumbers and consumers, but has also scooped two awards at a prestigious industry event in London.

Alfie, available within the Coolag product range, is the invention of Ty Harding which he named after his young son and has been developed to speed up the process of achieving a secure and upright fix for taps and shower fittings, in either solid or hollow wall structures. These and other benefits were sufficient to impress the judges as Alfie won in two categories at the British Invention Show awards dinner, held at the Savoy in November.

Alfie was the judges’ pick in both the British Invention (Consumer) and International Invention (Consumer) categories, with Ty Harding receiving the two awards from former heavyweight boxing champion, David Haye, before carrying on the celebrations with fellow guests on the Coolag table.

The Sales and Marketing Manager for Coolag, Oliver Pirret, commented: “We were confident in putting Alfie forward for the BIS awards because of the work that has gone into making the product the perfect answer for achieving an accurate and stable installation within different wall types, which is 75% quicker than conventional methods and prevents damaging leaks from occurring. In addition, it has been very well received by both professionals and property owners. We believe Alfie offers all the benefits to become the plumbing and bathroom sectors’ preferred solution for fitting brassware.”

Key to Alfie’s adaptability is the design of the manifold which is either secured to the back of the mounting plate for setting into solid walls, or on the front for timber stud and other hollow walls.

Four fixings are selected to suit the substrate, while the plates interlock for mounting bar shower valves or pairs of taps.  A dual seal within the wall zone prevents leaks while the chrome tube which stands perpendicular to the wall is protected by a plastic sleeve before being cut to length after the tiling or other wall finishes are complete.