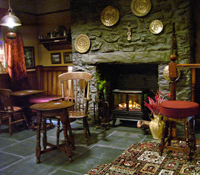 WALES: A Dimplex Opti-myst fire has made its TV debut as the focal point for village life and pub gossips in a new light drama series.

The TV drama series, Ista'nbwl, has been made for S4C by Rondo Media and the setting is a pub in deepest Wales, with the fireplace as the focal point, where the characters assemble to drink and chat about winning the Lottery, X Factor, family pets and life in general.

Dimplex retailer Colwyn Bay Fireplace Centre worked with the production team to identify the ideal fire for the programme. The pub has a traditional character and the design incorporates an inglenook fireplace together with a woodburning stove, leaving the designer and props buyers with the challenge of ensuring the fireplace looked real.

Martin Morley, the set designer for the show, explained: "Ista'nbwl is filmed in a studio set so we needed a fire effect that could fool the camera but did not involve gas because of health and safety issues, as there's no ventilation in the studio, plus there are the issues associated with storing the gas. The Dimplex fire is just ideal for us - all the cast and crew are very taken with it. The idea came from one of the crew who had seen and been impressed by the Opti-myst effect when he was looking for a fire for his own home.

"The smoke and flame effect looks great on screen, and we can run the fire without any heat – it's hot enough under the lights! The electric fire takes away all of the worry, we just switch it on for instant realistic flames."