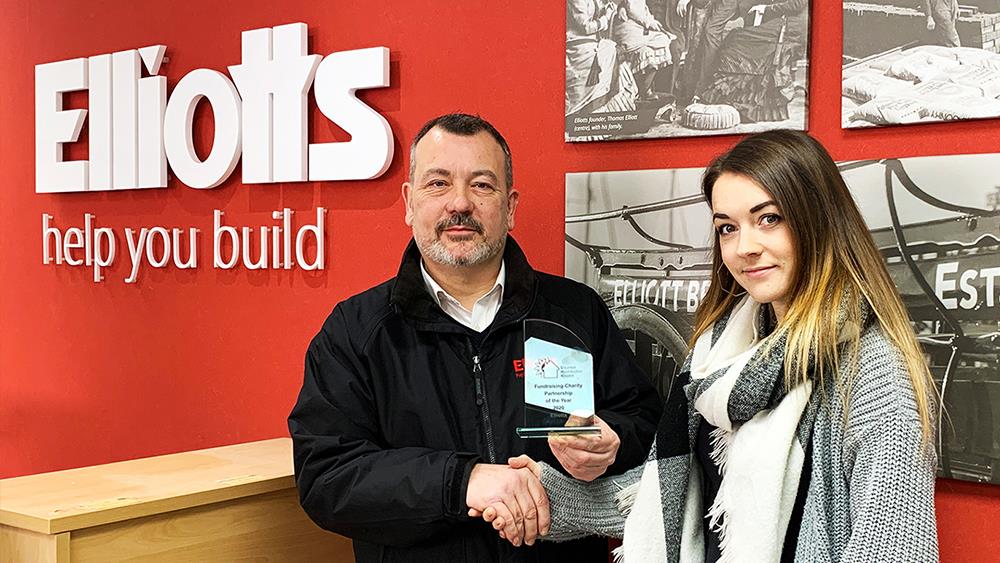 Elliotts Builders Merchant has been presented with a fundraising award by the Countess Mountbatten Hospice.

The local merchant was named “Fundraising Charity Partnership of the Year” by the Countess Mountbatten Hospice at its annual corporate awards evening.

Elliotts, who partnered with the charity from April 2018 to April 2019, raised more than £6,800 for the hospice and supported the charity by volunteering at events and donating goods for the charity’s boutiques.

"Many of our employees have a connection to Countess Mountbatten Hospice and they became our staff-nominated charity of the year in 2018-19”, says Tom Elliott, Managing Director.

“It’s an honour to be recognised as their Fundraising Charity Partner of the Year. It's thanks to the efforts of our team who encouraged donations and took part in numerous fundraising events.”

The Countess Mountbatten Hospice has been caring for people with life-limiting illnesses in Hampshire for over 40 years. It costs the hospice over £6 million every year to provide their services, most of which comes from donations and voluntary funding.

“Lots of Elliotts staff got behind their charity initiatives, with a particularly popular golf day and really successful cycle challenge across France”, says Rachel Rawlings, Corporate Fundraiser at the Countess Mountbatten Hospice.

“We're really grateful for their support and so pleased that we could recognise them in this way.”

Elliotts team to cycle across France for local children’s hospice

TG teams up for charity championship
Chandlers and Cembrit team triumph in rally
Elliotts raises over £6,800 for local hospice