George Clarke says every home in Britain needs an MOT 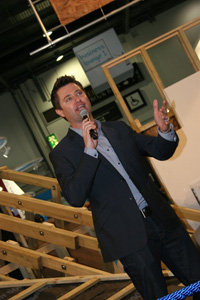 Architect and TV presenter George Clarke yesterday opened Plumb Center’s Practical Installer Arena at and called for every home in the land to have an MOT.

Mr Clarke, best known for Channel 4’s Restoration Man, said the Arena captured the simple but vital work needed to transform Britain’s 25 million ageing homes. He called on the Government to introduce an MOT for homes and said the key to winning hearts and minds was to help people cut their energy bills.”

He said: “We MOT our cars for safety and low emissions but we have rickety old boilers. Why don’t we have a MOT for every home in Britain? The tragedy is that people are losing their lives because of badly-fitted boilers.”

Mr Clarke said he was “staggered” at how many people have ancient boilers.

He joked: “When I say ancient boilers I’m not talking about their wives or mother-in-laws. People might think their 10 year old boiler is working fine, but it’s very inefficient. We need to change that mentality. It's not just about fixing, it’s about improving and maintaining things in a really efficient way.

Mr Clarke acknowledged the Green Deal is a great initiative, but fears it's going to be a tough sell. “People don’t believe they get something for nothing. We need to educate installers and the public. Yes, Green Deal involves a minimal loan but it is a clever, efficient initiative that will save people money on their bills.

“The public are more interested in their bank balance than they are in saving the environment. But tell them they’re going to save money and improve the quality and comfort of their home for years to come, and you might get them to sign on the dotted line.”

It surprises Mr Clarke how few homes in his neighbourhood have double-glazing – only four out of 82 homes. “It’s about insulation, double-glazing, and simple energy saving measures. This is what’s going to transform the efficiency of our homes.”

Simon Allan, renewables director, Plumb Center, said: “I’d like to thank George for his time today. It also is encouraging that he shares our enthusiasm for the renewables sector at the same time as recognising the challenges that installers face. Our message is simple – heating engineers have all the necessary skills to develop successful renewable businesses, and Plumb Center is on hand to help them every step of the way.”