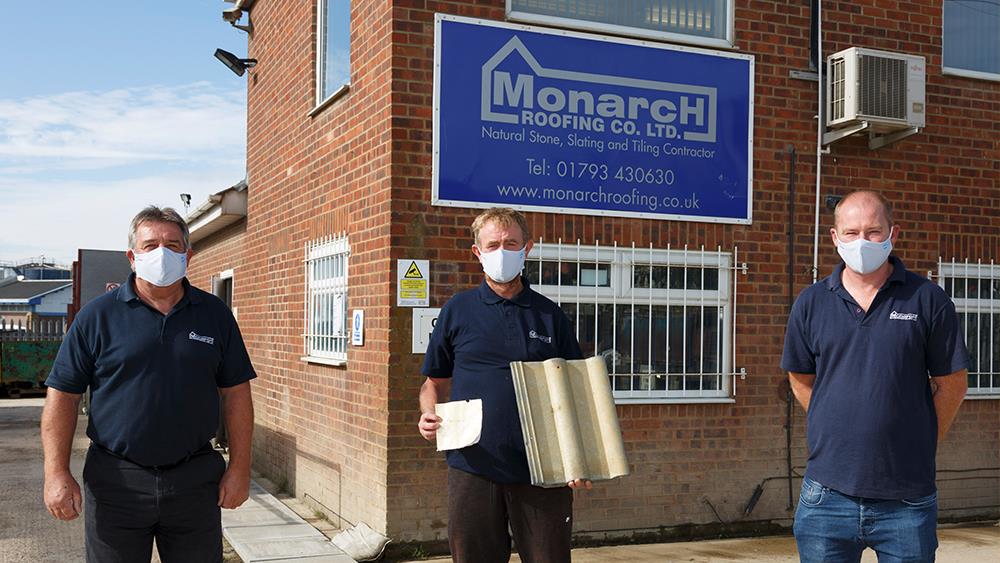 The BMI Redland team presented Monarch with a prize of £1,000 in Amazon vouchers.

Swindon-based Monarch Roofing is the winner of the BMI Redland Golden Tile promotion after one of its employees discovered the Golden Tile while working on a roof at MOD Larkhill.

The competition, launched to celebrate 100 years of BMI Redland concrete tile manufacture, featured a special Golden Tile, hidden at random in a full pallet of tiles before entering the supply chain.

So, a seemingly ordinary day for the Monarch team turned into an extraordinary one when experienced roofer Keith Lansley, who was loading the roof with tiles, found The Golden Tile.

Not sure if his colleague Tom Perry, who was passing the tiles to him, was playing some kind of joke, Lansley called down asking for an explanation.

A few moments later, and after some rummaging in the pallet, Perry discovered an envelope with the winning details of the Golden Tile promotion. The winning tile had now been found, emerging on a roof of one of the 62 houses Monarch was refurbishing at Larkhill.

The BMI Redland team has recently been able to present the prize of £1,000 in Amazon vouchers.

Contracts Manager, Steve Fitzgerald, has generously shared out £700 of the vouchers to the team of five who were on site.

Monarch Owner, Nick Jenkins, has, in an equally generous gesture, decided to give the remaining £300 of vouchers to local charities.

“What a great way of celebrating a 100 years of concrete tile manufacture and we’ll certainly be celebrating. I think it’s only right that the guys receive a fair share of the prize and that local charities benefit from our lucky day as well,” said Jenkins.