Google and Camelot at All Industry Conference 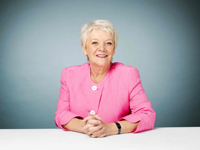 The Builders Merchants Federation (BMF) has secured two leading consumer industry executives from Camelot and Google to speak at the All Industry Conference 2013.

Dianne Thompson CBE is the chief executive of the Camelot Group of Companies, which is responsible for operating the UK National Lottery. She joined Camelot in 1997 as commercial operations director and took over as Chief Executive in December 2000 when Camelot was awarded the second licence to operate The National Lottery. Camelot has raised £29 billion for good causes much of which was spent on major building projects in the UK, including the Olympic Park. She is a former 'Marketer of the Year' and has been lauded for her efforts in spearheading Camelot's growth strategy.

In a career spanning over 40 years Ms Thompson has worked in marketing for a variety of manufacturers including ICI Paints, Sterling Roncracft, Woolworths and was managing director of Sandvik Saws and Tools, a major supplier to the Merchanting Industry. She received a CBE in 2006 for services to business and has consistently featured in Marketing magazines Power 100 list of the UK marketing most influential players. In September 2006 she was awarded the Chartered Management’s Institute Gold Medal for her strategic direction and leadership.

Richard Robinson is director, B2B Markets at Google. He has spent over 15 years assisting companies in the development and implementation of effective go-to-market strategies. He has led many strategic marketing initiatives across various business and technology areas and is currently working on a project with a major builders merchant. At Google he helps businesses develop highly effective digital strategies. Prior to Google, Mr Robinson was Vice President at IDC, where he led IDC consulting and marketing services business in Europe and he also led the client services division of IDG's International team based in EMEA. Richard a member of the IDM B2B Marketing Council and is a regular speaker at industry conferences.

John Newcomb, BMF managing director said: “We are absolutely delighted to have secured Dianne and Richard as speakers at the conference. They are both senior industry figures from two of the most highly regarded and respected consumer brands and their companies continuously strive to make sure they are ‘Fit for the Future’, the theme of our Conference for 2013.”