Ibstock Plc names James Dowson as its Apprentice of the Year 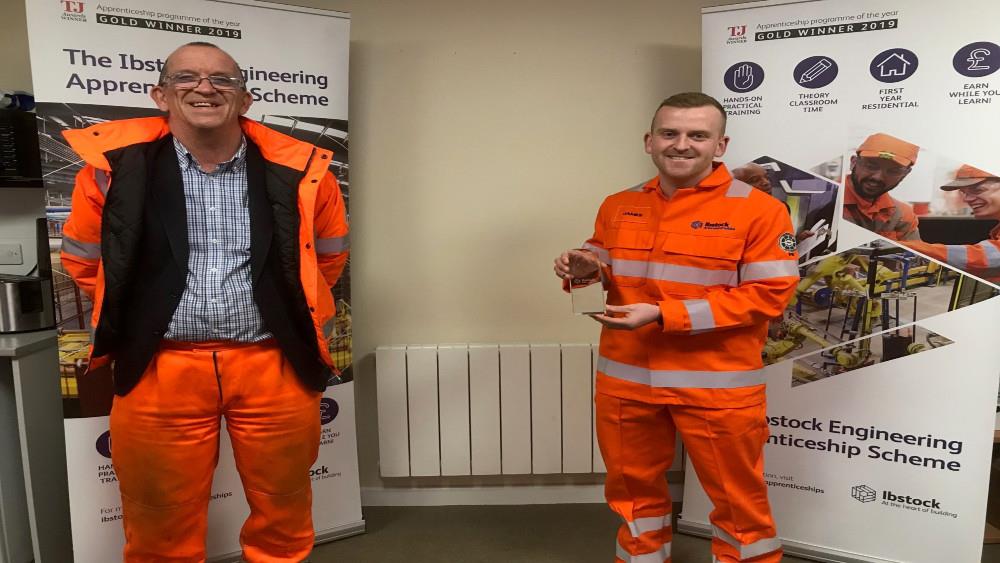 The Apprentice of the Year is awarded £500 as well as a two-part trophy; half of the trophy is given to the apprentice with the other half going to the factory where they work.

James Dowson has been announced as Ibstock Plc’s Apprentice of the Year.

Dowson, who works at the Ibstock Brick Birtley factory in Chester-Le-Street, impressed the selection panel with his proactive approach, initiative and the practical application of his skills.

The 25-year-old completed his Advanced Level Apprenticeship in Engineering Manufacture (Mechanical) in 2019, and is in the final stages of completing his Electrical apprenticeship as he works towards becoming a dual skilled engineer.

One of Ibstock’s key pillars as part of its Sustainability Roadmap 2025 is ‘People’ with the objective of building a safe, happy and healthy workplace where employees can reach their full potential.

The award, which is now in its sixth year, is an opportunity to celebrate exceptional performance. Apprentices on Ibstock’s award-winning scheme gain knowledge of the business through a mixture of classroom and practical learning, with graduates achieving externally recognised academic and vocational qualifications.

The Apprentice of the Year is awarded £500 as well as a two-part trophy; half of the trophy is given to the apprentice with the other half going to the factory where they work. Dowson was presented with his prize by John Lambert, Regional Production Director – North.

Dowson said: “Ibstock’s apprenticeship scheme is renowned for producing a high standard of apprentices. To be honoured as its Apprentice of the Year is something I am extremely proud of. The scheme has provided me with many learning opportunities and has helped me develop as an engineer.

"I would like to thank everybody who has supported me throughout my academic studies and practical experience on site. I hope to continue my career progression over the next few years within Ibstock and making a positive impact in future.”

Karen Harris, Early Career and Apprenticeship Development Manager at Ibstock, said: “I would like to congratulate James, and all of our apprentices, for their hard work and dedication to learning in such unprecedented times.

"Such was the quality of this year’s candidates; the selection panel had a very hard decision in choosing a winner. James stood out as he showed examples of projects which highlighted the practical skills he has gained and had a proactive approach to his work. He is a very deserving winner.

“As a business, our challenge is to continue to build on our skills base for the future by nurturing a new generation of highly qualified employees. Our apprenticeship programme is designed to deliver world-class engineering skills, and ultimately contributes to our goal of growing our business by investing in our people - from the very start of their careers.”