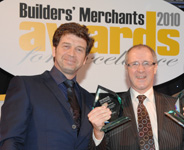 The UK's best independent builders' merchant has invested over £20 000 in its Port Talbot branch to improve customer access as part of its celebration of 10 years of trading at the site and 80 years of trading in Wales.

LBS opened at its Llandeilo site in 1931. The company's Cramic Way site, which opened in 2001, now has a new, easier to reach customer entrance coming off the A4241/Port Talbot Distributor Road (PDR).

"One of the main reasons the £110m PDR is being developed is to attract inward investment and assist in industrial and commercial developments of the south western area of Port Talbot such as this," said managing director Mark Davies.

Work done to the LBS site has included creating a small access road from the PDR to the branch, changing the traffic flow within the yard to improve safety, plus installing a range of new signage communicating the change of access to customers and delivery vehicles.

The investment exemplifies a long-term commitment to the area for LBS, which last year opened a branch in Neath as well as a specialist roofing branch in Landore, Swansea (Casey's Roofing At LBS).

The merchant will be holding a celebration event at LBS Port Talbot on Tuesday, 5 July, to mark the branch's 10th year of trading and the completion of these its improvements.

Starting at 10am there will be product demonstrations by suppliers, a range of one-day-only product offers, plus light refreshments for customers and local dignitaries attending. The event forms part of LBS' 80th anniversary celebrations, which also include separate staff and customer events.

"We are thrilled to have been successfully trading in Port Talbot for 10 years and would like to take this opportunity to thank all of our customers for their valued support," said Mr Davies.

"It's great to be able to improve the service we offer in Port Talbot and this investment will make it quicker, easier and safer for customers to use the branch in the future.

"It's no coincidence that the growth of this branch since 2001 has corresponded with our successful expansion throughout south west Wales as a wholly Welsh-owned and based company. Developing this site is key to us in terms of continually improving our offering to customers living and working in Port Talbot.

"After achieving market-leading growth in 2010 and being voted the UK's Best Independent Builders' Merchant at the Awards for Excellence, we are reinvesting in LBS in 2011 as we celebrate our 80th year of trading."

Aberavon MP Dr Hywel Francis commented: "I would like to applaud the success of LBS Builders' Merchants. I am impressed with the business awards achieved by the company in recent years and would like to wish LBS every success in its continuing development, including its prospects for increasing future employment opportunities locally."