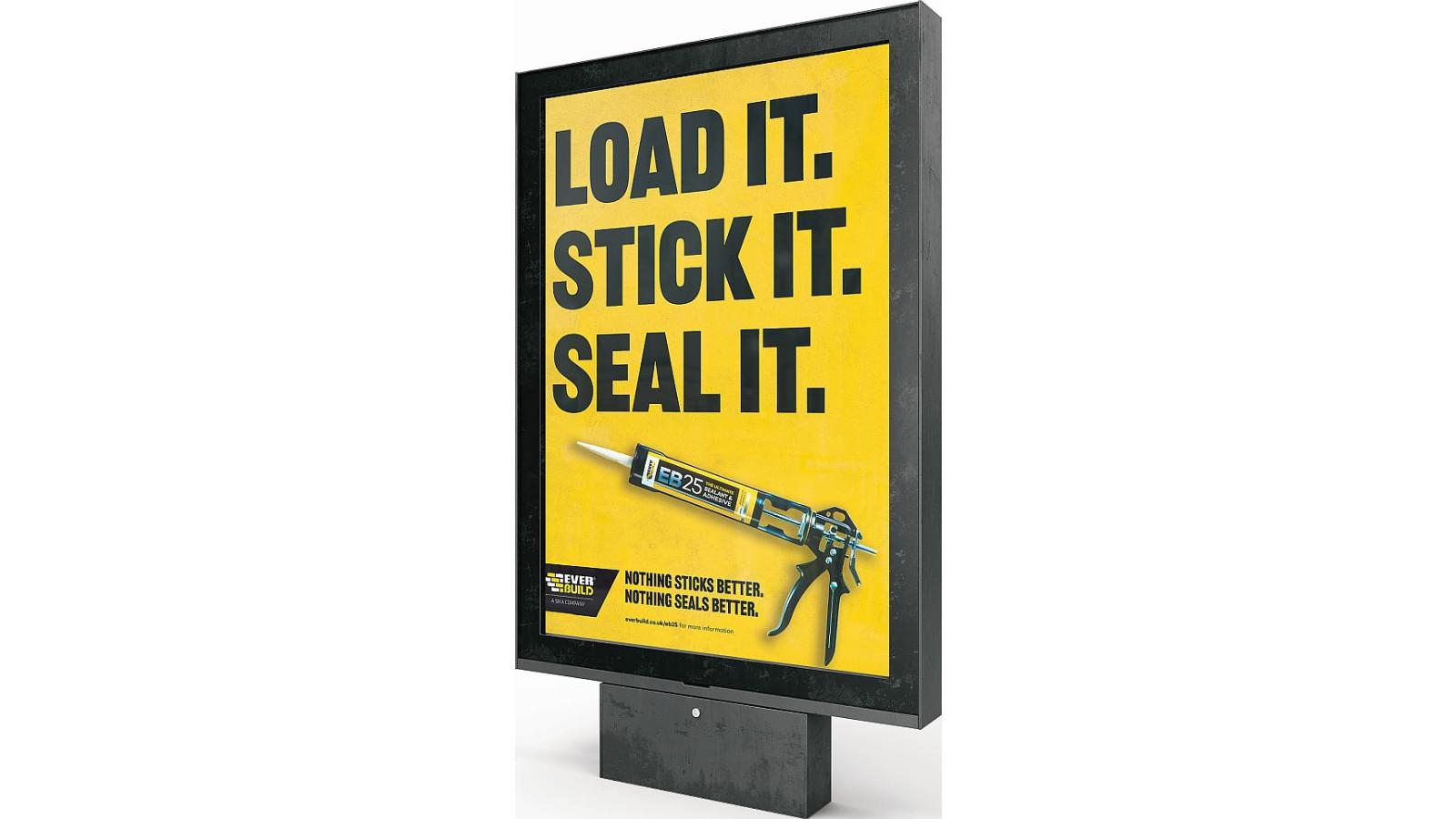 Sika Everbuild has unveiled an eye-catching advertising campaign for its innovative adhesive EB25 - and it’s going to be hard to miss the message over the next 12 months.

The straight-talking, no nonsense campaign focusses on the core benefit of EB25 - its dual-purpose formulation which allows it to stick and seal in equal measure. The adverts’ concise messaging cuts straight to the chase – much like EB25 itself.

Featuring a bold yellow and black design, the new campaign will for the first time include television adverts, as well as appearances across numerous radio stations, in national newspapers, on outdoor poster sites, through social media and in the trade magazines. To support stockists and merchants during the campaign, Everbuild has created a series of complementing POS materials including A1 posters, shelf wobblers and countertop mats. And with a choice of metal or cardboard FSDUs in the same stand-out style, EB25 will be just as prominent in store as out.

Further commercial support for merchants stocking EB25 is available as part of the company’s planned programme of UK-wide product roadshows this summer. The roadshows will bring Everbuild’s products, including EB25, to life through fun interactive games and demonstrations, while the team will also be on hand to offer product training to merchants’ counter staff.

Darren Bunting, business unit manager for Sika Everbuild said: “It’s been two years since we launched EB25 and in that short time it has become one of the most popular hybrid sealant and adhesive products on the market, thanks to its exceptional strength and versatility.

“Two years on, it’s the perfect time to get the EB25 name in front of more of the nation’s professional tradespeople through national advertising, supported in store by our roadshows and new POS materials. The message about EB25’s dual-action, high performance formula will be everywhere so we want to make sure our merchant customers are fully stocked, armed with all the information they need and ready to meet demand.”

The ultimate sealant and adhesive, EB25 is formulated to bond and seal almost any material, indoors, outdoors and even submerged under water. It can be used in sanitary and food preparation areas and is resistant to mould, temperature extremes and chemicals.

Merchants can register their interest to host a Sika Everbuild roadshow either by visiting www.everbuild.co.uk/roadshows or via their local Everbuild business development manager.

To find out more about Sika Everbuild’s extensive range of products, please visit www.everbuild.co.uk or contact your local sales representative.