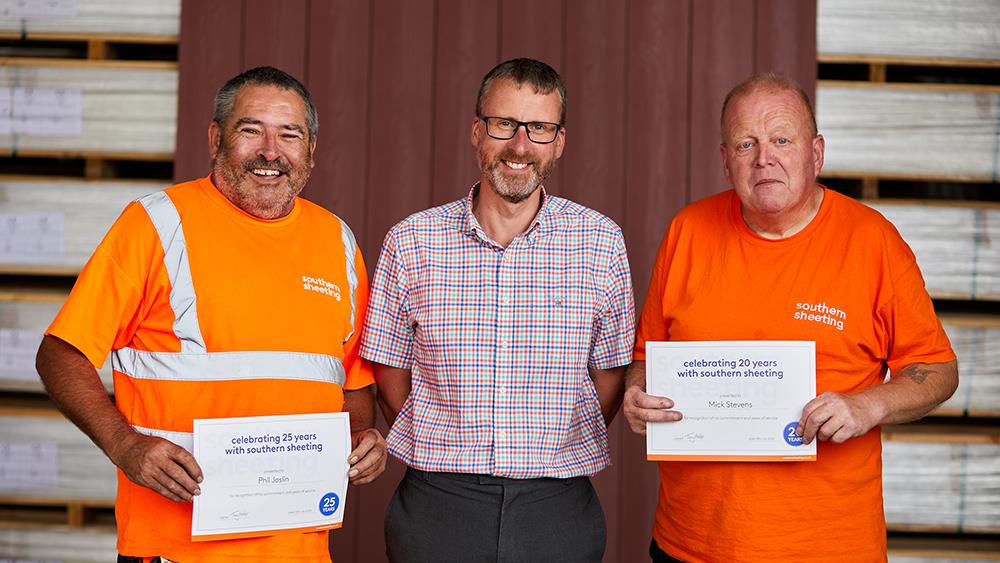 Southern Sheeting has presented delivery drivers Mick Stevens and Phil Joslin with long service awards to celebrate 20 years and more of working with the company.

The pair have been delivering building materials around the UK during the pandemic, helping to keep construction projects going with their calm and practical approach. They are both looking forward to spending their money on improving their gardens.

Joslin, who lives near New Chapel, said: ”It’s such a great family atmosphere at Southern Sheeting and they really look after their staff. I love being outside during the day and seeing new places.

”During the lockdown I really enjoyed delivering to people and helping to keep their spirits up by having a laugh and joke together. It’s pointless to be miserable about the situation we’re in and it was really good to help people out. They were so grateful that we were able to deliver to them.”

Joslin joined Southern Sheeting when he was made redundant by a fencing contractor after 19 years. He secured temporary work as a driver. That soon turned into a full time job, initially in the yard, but then eventually as a driver on a 7.5 tonne lorry.

As well as spending the cash on garden improvements, he is also hoping to put some of the money towards a holiday in a static caravan in Porthcawl, Wales, when restrictions ease.

Stevens, who lives in East Grinstead, said: ”I love working here – they treat you like family and Tony is the best boss I’ve ever had. Everyone is so friendly and easy going which is perfect for me.

”I wouldn’t want to work somewhere where I’m just a number. They trust their staff to do a great job here and I’ve never felt the need to look for another one. Every day is different. I love meeting people and getting out on to the open road in the counrtyside.”

On working during the pandemic, Stevens said: ”I just used my common sense and stayed calm. It was very rewarding helping people by delivering important construction materials and many of the people we were delivering to were self employed so it was especially important for them when a lot of the builders’ merchants were closed and materials were hard to come by. People were so appreciative of the service we were providing.”

Stevens joined the business on recommendation from a friend after he was made redundant from his job as a motor mechanic. When offered the job he was asked: ’When can you start’ to which he responded: ’Tomorrow?’

He started the next day as a forklift truck driver in the yard and then became a delivery driver. Southern Sheeting helped him to take is HGV license and he passed first time.

Tony Hobbs, Managing Director, Southern Sheeting, said: ”It’s a pleasure to present Mick and Phil with their long service awards and I’m looking forward to many more years of working with them. They are a credit to Southern Sheeting.”

Aggregate Industries’ employees top of the class at IoQ Awards