The rise and rise of the online merchant 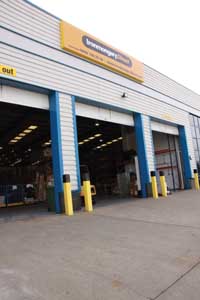 A merchant is a merchant whether it trades on the high street or on the internet. With an 80% trade customer base, IronmongeryDirect classes itself as a merchant. Here, managing director Wayne Lysaght-Mason talks to Lynn Sencicle about the company’s expansion and growth.

IronmongeryDirect was launched as a simple one-branch ironmongers in Leigh-on-Sea by Reg Bass over 40 years ago. It has grown steadily since, and especially over the last 10 years when it has whole-heartedly embraced the internet retail revolution.

At the end of 2011, turnover hit £15m, up 20% on 2010, demonstrating that the company is doing better than just weathering the current economic conditions.

“This is now our seventh consecutive year of growth, which is a major achievement in any circumstances,” says managing director Wayne Lysaght-Mason, “let alone in the tough times the construction sector has been experiencing.

“But IronmongeryDirect is still a merchant’s merchant, even if we do things a little bit differently.”

By the usual definitions of a

merchant, IronmongeryDirect is a single branch national merchant. “We are no different from a traditional

national,” says Mr Lysaght-Mason, “Phone, order, deliver to a customer base that is 80% trade. The only difference is that there is just one branch.” And, of the 20% non-trade, half are trade referred.

For customers who need to talk to a real live person, the contact centre deals with those enquiries, including technical assistance. A quarter of the entire staff is currently qualified through the Guild of Architectural Ironmongers (GAI) and that number is growing as the company promotes self-development.

IronmongeryDirect is invested in the merchant sector as well as ironmongery, having joined the BMF as a merchant some four years ago, and is a headline sponsor of the GAI Awards.

The company has just the one branch at Basildon, but it encompasses 50 000sq ft – double that of its

previous premises. The company moved into the new building in

August 2011 and it was officially opened by Mr Bass in October.

The move, after nine months of careful planning was achieved over a single weekend with no business days lost. What makes this even more remarkable was that the company switched over its computer system to SAP on that same weekend. For many staff it was like coming in to a brand new company on the Monday morning.

The building is enormous and includes head office, distribution and warehouse, along with enough spare room to allow for the targeted growth.

“We will have to expand again in around four years’ time, if we reach our targets,” says Mr Lysaght-Mason. “The goal is to reach £50m turnover within five years and there is the space here to achieve this.

“The building layouts have been specifically designed so that we can expand with the planned growth.” The new building was purpose-built with £2.5m so far invested in IT and premises.

A conveyor belt system – including an interestingly spiral belt between floors from main stores to the picking area – was installed and is ready to be added to.

The warehouse area carries a stock level of over 13 000 product lines and rising.

Some products are shipped in from overseas where quality control may not be on the same level as that in the UK. The company’s goods-in area checks that these products are at least the equal of UK merchandise.

The company uses three carriers to ensure full national coverage, with each carrier having different specialities in geographical areas and delivery times. Certain carriers are preferred for different packaging types.

The computer system is geared towards analysing each order to determine the packaging to be used (box/envelope size) and the best carrier, enabling Ironmongery-Direct’s biggest selling point – next day delivery – to be achieved.

The company currently runs at a 98% ‘first-time complete in one overnight delivery’ rate of efficiency, and is working towards a 99% goal.

The new building incorporates the company’s only walk-in trade counter, which enables local tradesman to have access to stock.

“There are no plans to open any more, though,” says Mr Lysaght-Mason. “I don’t believe that branches provide the correct level of service in our sector. How can they, without a warehouse of this size attached?”

Customer service is paramount, and “customers are regularly asked to fill in satisfaction cards so that we can analyse our strengths and weaknesses,” continues Mr Lysaght-Mason. “Customer ‘wow’ meetings are constantly being run, and if there is no ‘wow’ factor, then the question is always asked, ‘why not’?”

It is this dedication to customer service that underpins the company’s ambitious growth plans and, with the changing economic and political climate and the rapidly evolving internet, it will be interesting to see where IronmongeryDirect is in five years’ time.

This article first appeared in the March edition of Builders' Merchants News.