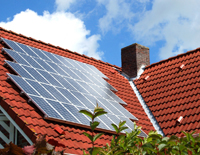 The warning, from PTS one of the UK’s leading plumbing and heating merchants, is a result of increasing concerns over unscrupulous tactics being used by some companies offering free solar panels.

Typically, salesmen will make the homeowner the offer of free panels and installation, in return for the proceeds from the feed-in tariff. This type of offer is becoming more common with many reputable companies providing a similar service which includes free maintenance throughout the whole contract and installation by an MCS accredited installer. However, there are a growing number of new companies which don’t offer such customer protection and are targeting older, more vulnerable homeowners.

Ian Stares, product group manager for renewable technologies at PTS, says the practice of these un-reputable companies needs careful scrutiny and could be considered as unethical. “We have been made aware of a number of cases where consumers, in particular elderly pensioners concerned about rising energy bills have been targeted by new companies with what seems, on the surface, to be an attractive offer. In reality the company pockets most of the financial upside while the customer is left with unanswered questions about maintenance and the effect of the panels on the resale value of the home and potentially increased insurance costs.”

He continued: “In one case, the salesman was proposing to site 21 solar panels on a single property which would still have only covered approximately three quarters of the property’s electricity consumption. Our suspicion is that the company was proposing to use poor quality solar PV panels which were not capable of generating enough kilowatt hours of electricity to power both the property and generate enough electricity to sell back to the National Grid.”

Mr Stares also believes that the fine print in some contracts may give rise to further concerns. “The detail in many of these contracts includes a clause stipulating that a ‘small fee’ will be payable to the company if the property is ever sold, but the exact amount is never made clear. What’s more, in cases where a large number of solar PV panels are being specified, we have concerns that no account is being taken of the structural weight capacity of the roof or the homeowner’s potential insurance liability if any damage to the roof occurs.”

He continues: “My advice to any homeowner considering a solar PV installation is to get the advice of a Microgeneration Certification Scheme (MCS) qualified installer who is fitting recognised solar PV manufacturer brands. Always insist on a proper quotation and if the installer knows their business they should provide you with calculation which shows the amount of generated solar PV and an estimation of the feed in tariff.

“However it should be mentioned that there are some companies who are offering this type of service who are high quality reputable installers. My concern is that solar PV is possibly going down the path of the “double glazing” situation the UK experienced in the 1980’s.”