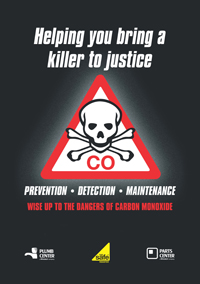 Stopping the silent killer in its tracks is the aim of a nationwide campaign in more than 500 Plumb Center and Parts Center branches throughout May.

Wise up to CO is designed to drive home the message to installers and the public that relatively cheap and easy-to-install CO detectors will save lives. The high-visibility campaign will include external banners, safety cards, dispatch stickers, boiler stickers and information leaflets – as well as special events at branches.

“We’re passionate about this message because it can help save lives,” said Plumb and Parts’ Gail van Dijk. “Any appliance that burns carbon is a potential killer, so we all owe a duty of care to our customers. We can’t just rely on charities to educate and protect the public.”

The campaign has received the backing of leading manufacturers of CO detectors and alarms Testo, Honeywell, Anton, TPI and Kane, along with the Gas Safe Register.

Tragically, its importance has been brought into sharp focus following the deaths of a mother and daughter on Lake Windermere in March, and an elderly couple and their daughter in Cornwall in February – carbon monoxide poisoning was suspected in both cases.

Mr van Dijk added: “The number of people killed or seriously affected by CO poisoning is shocking. The Health & Safety Executive (HSE) said around 50 people a year die from accidental CO poisoning in England and Wales – with around 4,000 admitted to hospital with symptoms.”